You are here: Home

In 1900, The Lyle Culvert Company started making metal culverts at Lyle, Minnesota. A year later, in 1901, the company moved to Minneapolis, MN locating itself at 171 - 27th Avenue, SE, not far from the University of Minnesota.

In 1912, two engineers with the Culvert Company, the Fraser brothers, designed, developed and patented some sign making machines -- hence the birth of Lyle Sign Division of the Lyle Culvert Company. The machines were built on the pantagraph principle with messages carved or routed approximately 1/16" deep in heavy (12 gauge) steel. For the next 21 years, traffic, park, parkway and street name signs were produced by this carved-in-process.

In 1928, the Sign Division was separated from the Culvert Company. Lyle Signs, Incorporated was established as a separate corporation, locating itself at 2720 University Avenue, SE in Minneapolis, MN. 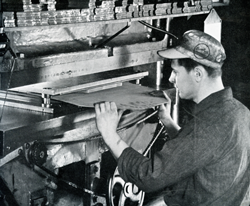 all in one operation. Carved-in process signs were still produced because of their extreme longevity, but as years passed, costs of labor (carving one letter at a time) made prices prohibitive. There are, however, carved-in process street name signs still in use in many cities, after 40 or 50 years of service, with only minimum refinishing maintenance costs involved.

Lyle expanded its plant at 2720 University Avenue, SE three times from 1928 to 1964. The need for a more modern and efficient plant under one roof was imminent. In 1964, a new plant was built in Bloomington, MN.

In the ensuing ten years, cost of manufacture grew and precipitated the 1974 decision to move the complete manufacturing operation to De Smet, SD. Headquarter functions remained in the Minneapolis, MN area.

The use of reflective sheeting and reflective beads for background and/or message reflectorization started around 1939 and gained considerable popularity in the years after World War II (1945 and thereafter). Reflective beads were used long before that, but never in Lyle's plant because the type of binder and beads available at that time did not hold up for any length of time.

Reflective Sheeting manufactured by 3M Company and offered for sale in 1939 was (and still is) called Scotchlite. Lyle was the first sign company working with 3M Company in the use and sale of Scotchlite reflectorized signs.

In 1958, Lyle added the manufacture of interstate type signs and is currently considered one of the leading manufacturers of these larger type signs. Starting with its first contract covering signs erected in Michigan, Lyle has expanded its activity in Interstate Signing to include most of the 50 states in the US. Types of materials and construction vary from state to state.

Today, Lyle Signs manufactures and produces a wide variety of signs for a variety of customers. Lyle's state-of-the-art 90,000 square foot facility has been designed to manufacture high quality signage with very short lead times. We believe we establish the industry standards for quality, lead time and service.

For further information on our Products, please email us at [email protected] or Contact Us using this web page.